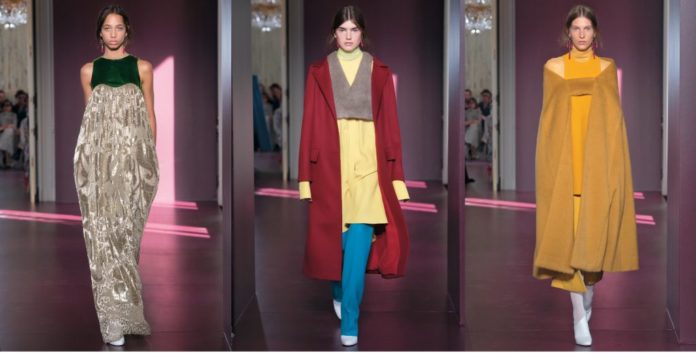 Haute Couture for everyday life, that is Valentino’s leitmotiv, because the art of Couture is not limited to glitter and big evenings. It is the know–how, the nobility of material and hand made. At Dior, masculine becomes feminine and invites to travel. Elie Saab draws his inspiration from the conquering heroines of the successful serial Game of Thrones, while Schiaparelli makes a muse of the rebel woman to define a new femininity. Karl Lagerfeld pays tribute to the Parisian at Chanel while Ralph & Russo capture the contemporary feminine beauty, in an instantaneous… With their fashion shows in Paris or Rome, designers sublimate the modern woman during winter 2018. 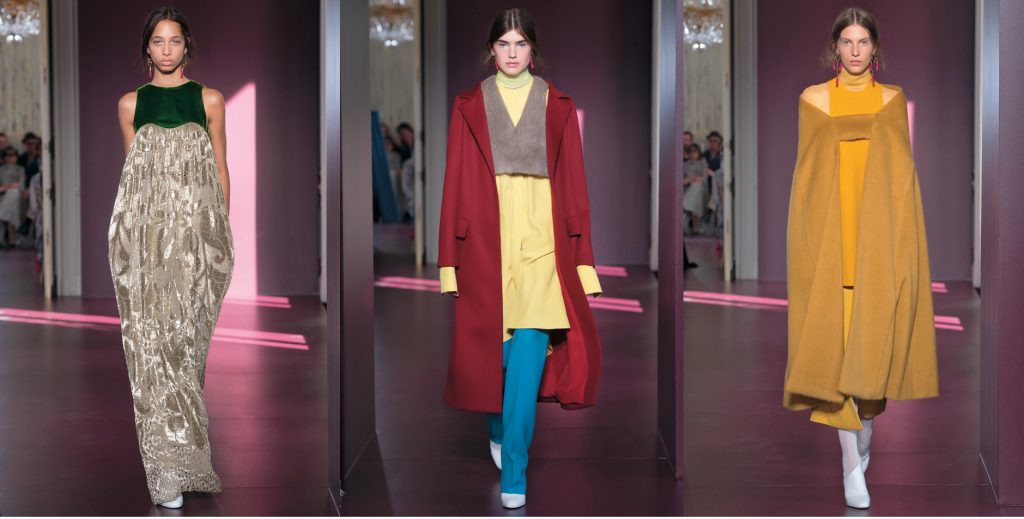 Haute Couture to wear during the day. The forms are simplified, and are superimposed. Seven clutches representing the seven capital thins, realized in collaboration with the artist Harumi Klossowska de Rola punctuate the fashion show. 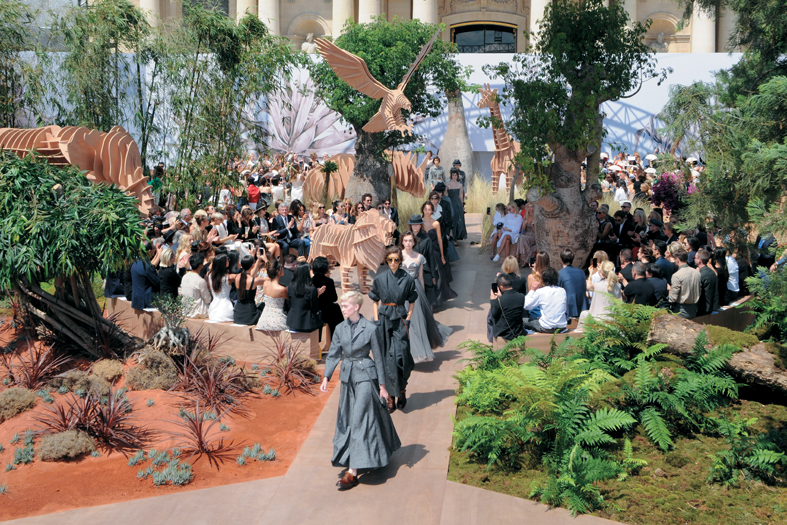 This fashion show, celebrating the 70th anniversary of the house, is an invitation to travel referring to an imaginary cartography. The masculine fabrics transformed in shimmering surfaces, colors, flowers or card games embroidered become like an atlas on capes or evening dresses in tulle and silk.

Medieval splendor inspired by Game of Thrones…Opulence and uncontrollable beauty. Velvet and lace intertwine, tulle and muslin bring lightness and draped. Structured and modern lines for a conquering queen. 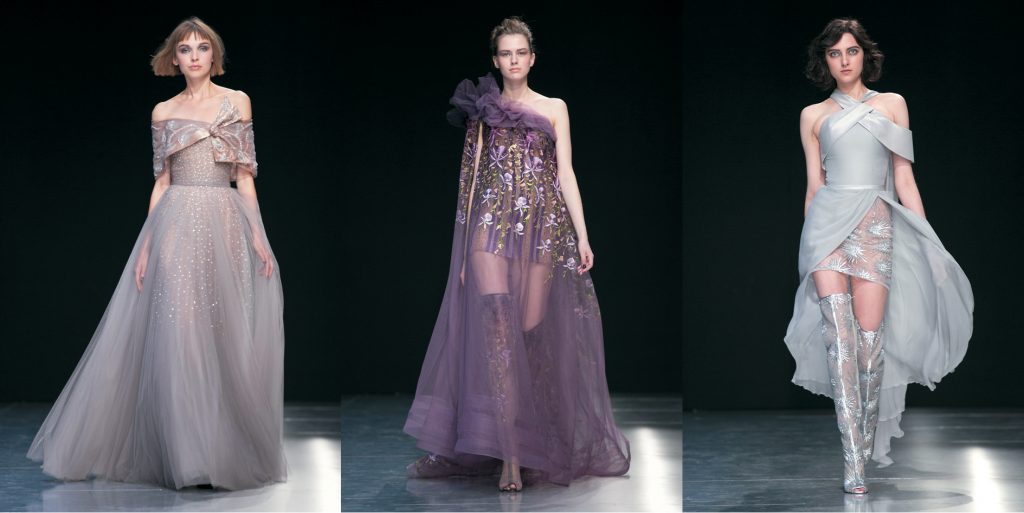 A touch of mystery, romanticism and contemporary elegance for the FW 2017-2018 Haute Couture collection by Georges Chakra. Long and short asymmetries, corseted busts, skirts with tails, ballerina lines, transparency and opacity, a play of shade and light. The looks are enhanced with bejeweled high boots, for a total sophistication.

The fabrics are rich: velvet, muslin, lace, embroidered tulle, feathers, flowers inserted between crystals and stones. And autumnal colors: Prussian blue, imperial green, purple, violet, quartz, amber, orange. The black and white, and the reflections of bronze and silver lames slide subtly inside the dark colors. Spectacular end: mini corseted dress of the bride, with mother of pearl flowers and tulle waves, with high boots, under a cape and long train… 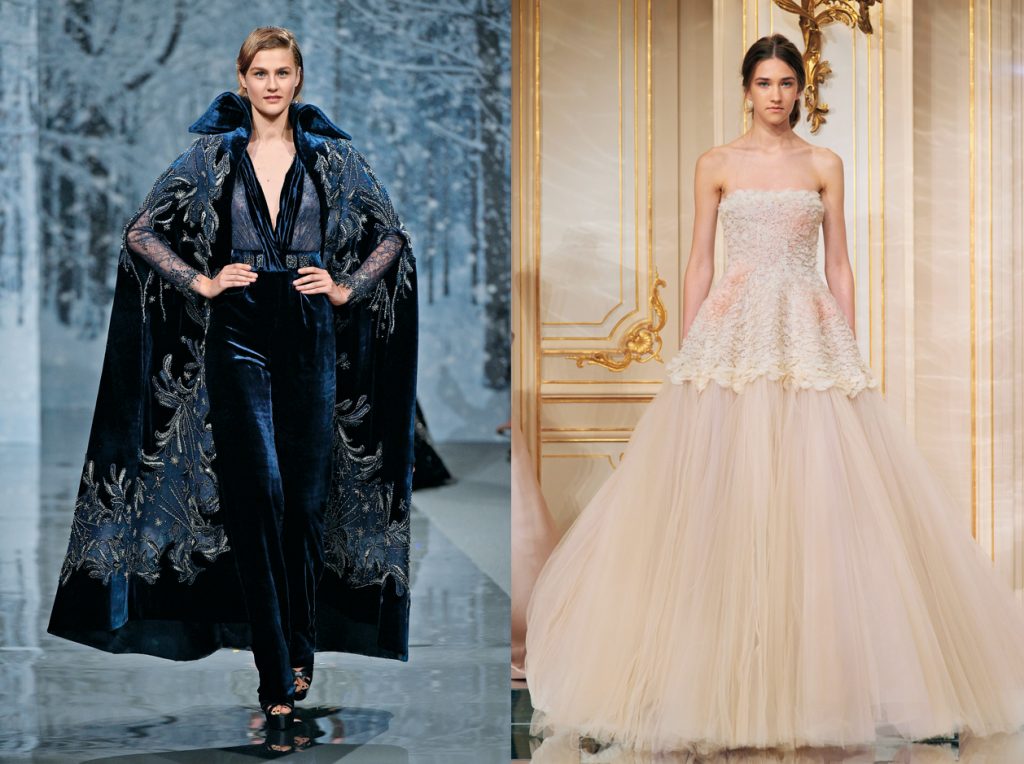 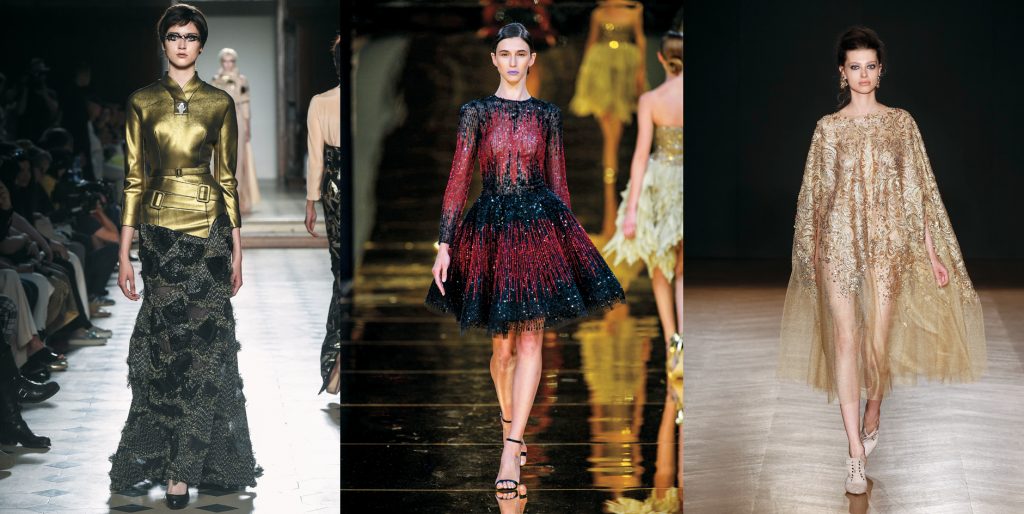 For this FW 2017-2018 collection, the designer Ziad Nakad suggests his romantic vision of a season with magical colors. Velvet, feathers, tulle and lace intertwine through lovely embroideries. The Syrian designer Rami Al Ali inspired by the serenity of the angels of the American painter Abbot Handerson Thayer to create his collection. With Aeriform, Iris Van Herpen studies nature and the anatomy of the air and the idea of materialism and aerial lightness, creating a positive negative space with shades and light. Constantly inspired by the great balls of the XXth century, the crazy feasts between the two world wars, the glamour of the golden Hollywood age and the dazzling and delirious career of Studio 54 in New York, Rani Zakhem celebrates the star for what it is: a scintillating accent on the silk of the night and the brilliant symbol of eternal femininity. Julien Fournié pays tribute to the great women, his customers with ensembles with sharp cuts, and delicately gothic accents. Dany Atrache is inspired by the seventies for his new collection. 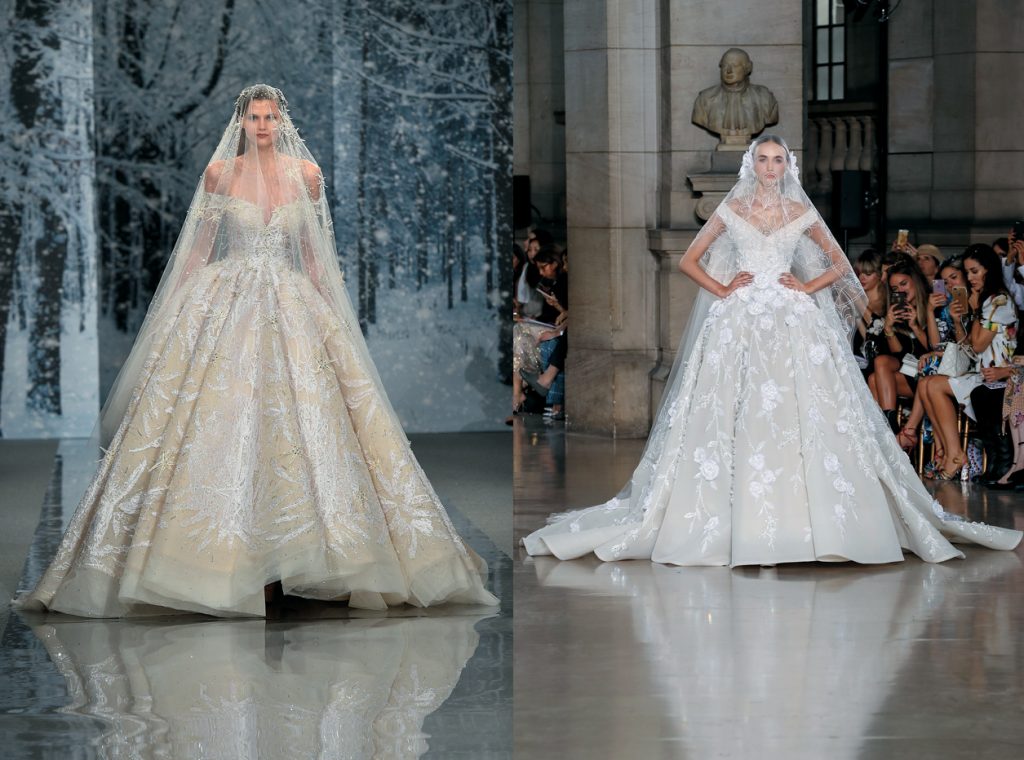 Sheath, train, veil, princess, mermaid…The gown of the bride of this winter 2018 is seducing and sublime, quintessence of know-how and talent. Need of femininity, glamour, romanticism? Immaculate silhouettes, short and vaporous, minimalist and elegant cuts enhance the bride and reflect her personality. Dazzling creations, sophisticated, fairy, worth of a true princess. 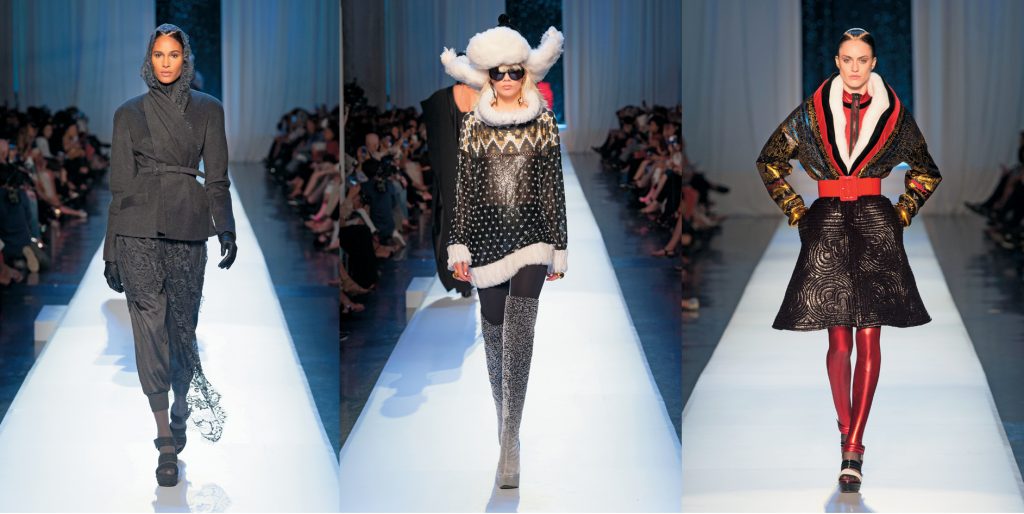 Trip to the mountain peaks for the queen of the snow of the French designer. Pompoms hats, satin coats, tapered trousers, jackets with large kimono armholes, jacquard pulls and draped dresses. 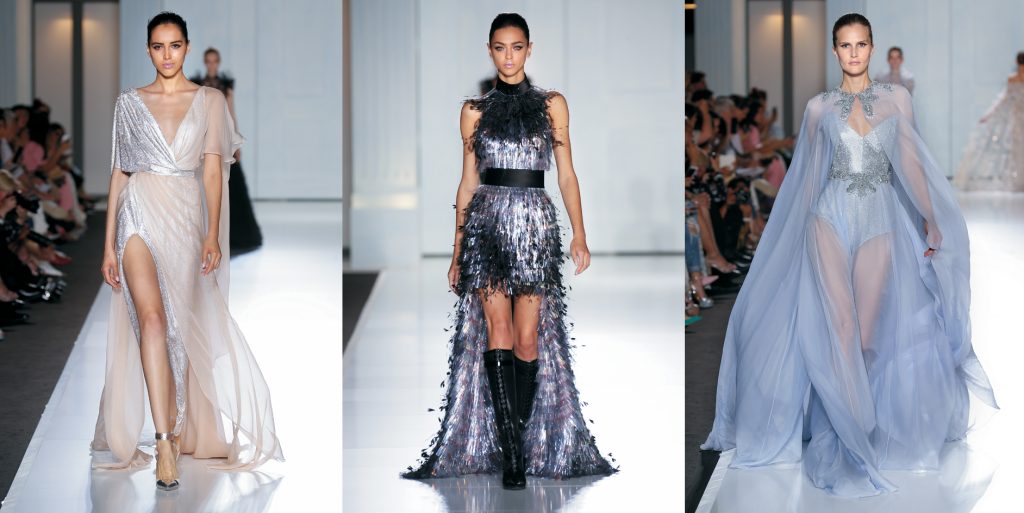 The British brand paints a portrait of women with a palette of iridescent colors, movement of white slashed feathers, fluid draped and ribbon of metallic mesh.

Precision and lightness for a collection marked by graphic volumes. The jumpsuit is transformed in a molded armor sticking to the body, architectural shoulders, the cut is impeccable. When fantasy comes into life.

Gibson Girl or the beauty and modernity equal to the man. Long sheath, body and cape, ostrich feathers, beaded fringes, pleated tulle, rustling… A collection for this generation of women as strong as delicate. 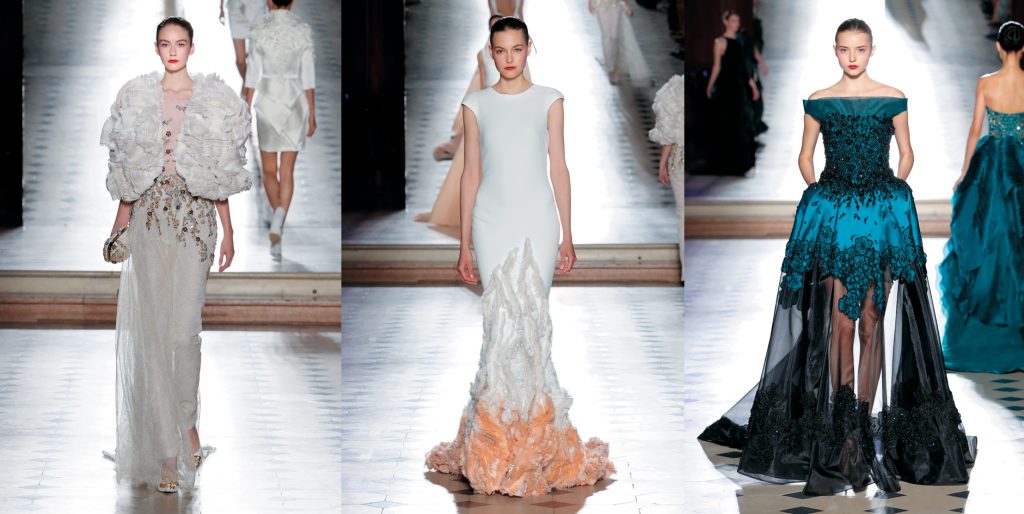 A collection based on the unique and delicate pattern of flowers… but reinvented and delicately hand embroidered. Organic volumes, vaporous silks, vivid colors: burgundy, jade, silver, rose and black and white.